Salami and summer sausage are excellent food choices as they both taste good and can last long. However, similar looks confuse people sometimes.

So, what is the difference between salami vs summer sausage? If you can’t find the answer, Health’s Kitchen will do it for you.

This article gives you a side-by-side comparison between the two foods. Check each factor carefully to find the best one for your meal!

This dish gets the name “salami” as it means “to salt” in Italian. Salami refers to any kind of meat product; it does not refer specifically to one type of sausage.

Salami is a sausage made from pork, beef, or horse meat and has an elongated shape. People make it by curing the meat with salt, fat, spices, and other flavorings. Then, they pack the mixture into casings to form the shape.

You may be familiar with this food, which homeowners like to keep in their kitchen all the time. When sliced and served with bread and wine, it makes one of the most popular appetizers.

There are various kinds of salami, such as Felino, Salame di Piacenza, and Salame Milano. They have different slices and textures. Summer sausage has a lengthy history. German people came up with methods to keep their food edible and fresh because the journey off the American coast was too long.

The preservation method used during manufacturing is the key to a summer sausage’s extended shelf life.

For instance, the fermentation process it goes through offers a lower pH level, which limits bacterial development.

People use ground pork or beef to make summer sausage. There is also a variation made only of beef.

Seasonings for this dish are black pepper, mustard seeds, garlic, salt, and some other spices. This sausage’s tangy, spicy flavor is a result of the preservation method and the seasoning. 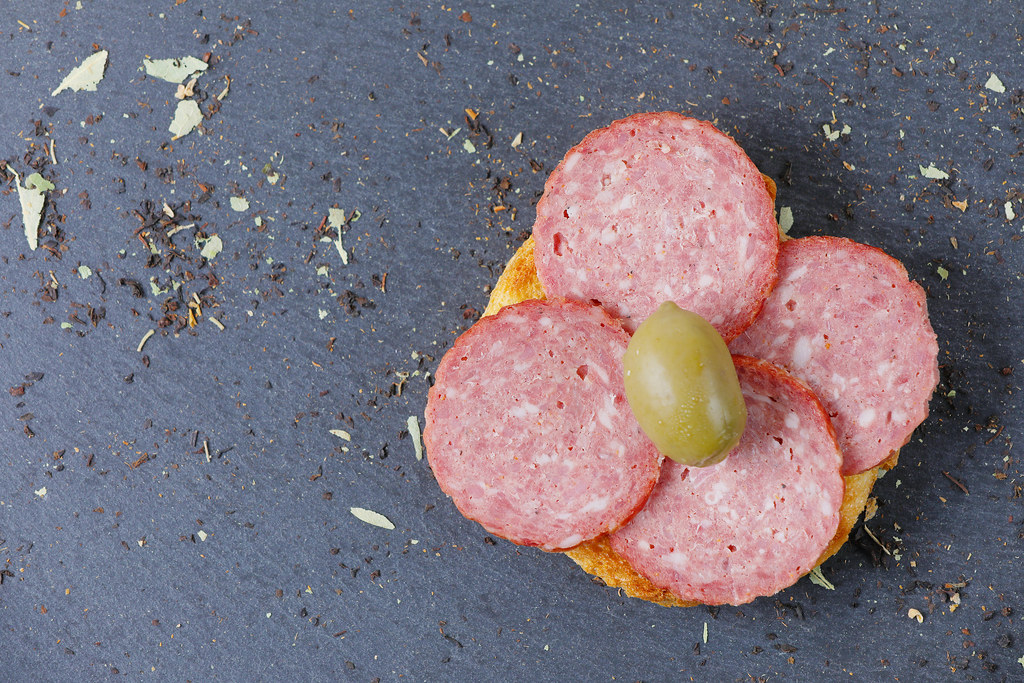 2. Summer sausage has a long history

Differences Between Salami Vs Summer Sausage

Salami and summer sausage share some traits in common, such as their taste and appearance.

Meanwhile, the significant difference between them is the moisture content.

We will reveal more interesting facts in the sections below. Please check to compare the dishes.

These two foods have different capacities for holding water. Summer sausage is a drier choice because it contains more moisture.

For instance, when drying the meat, the summer sausage dehydrates with a moisture content of about 15%, leaving the meat with more water.

On the other hand, salami loses more moisture than other foods, having a water content of roughly 25%. The remaining moisture content decreases as more water drains while drying. 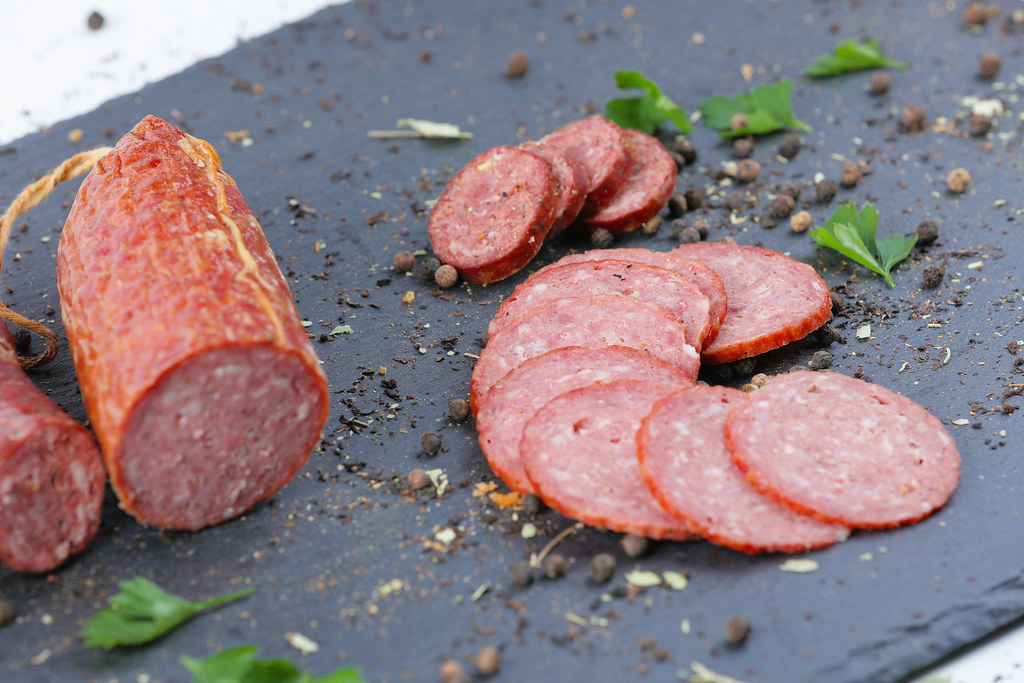 The refrigeration is different between the two types of meat. It determines the best storage method for each and their lifespan.

It would be best to store your summer sausage in your refrigerator. In such a cool and dry condition, your food maintains its quality for up to several weeks.

Salami is suitable for storing in a refrigerator and on a countertop, with the latter being a better choice.

Your food can last for three to six weeks if the countertop is dry and well-ventilated. 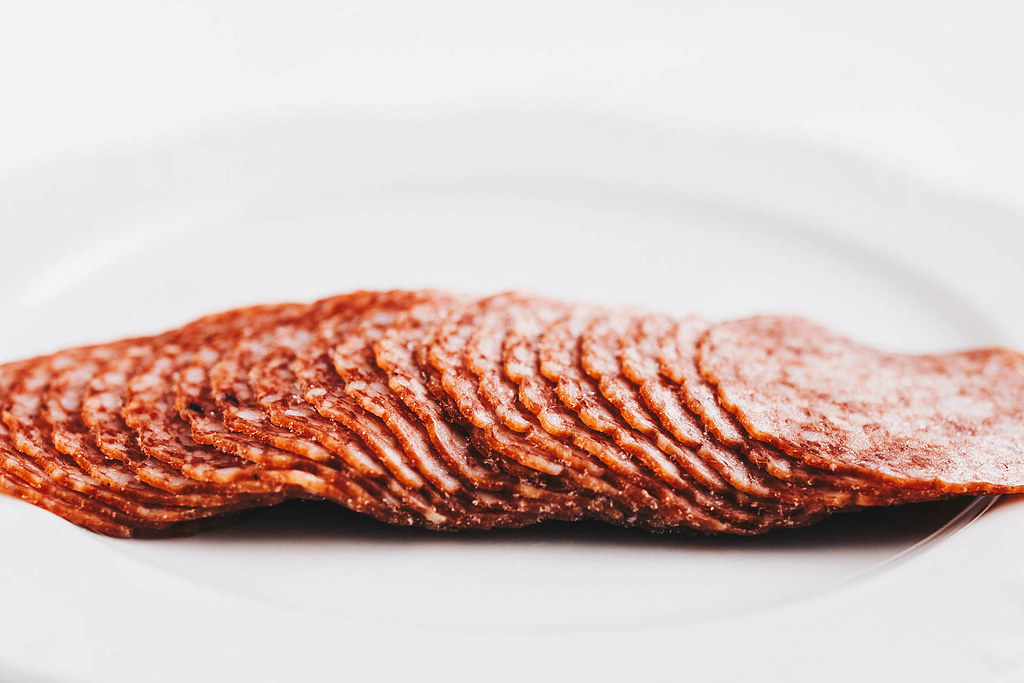 The amount of moisture in the meat determines how dry it is. The summer sausage, for instance, is semi-dry because it has more moisture.

Smoking refers to the process of draining the water content available in the meat. You can apply this method to both foods.

The summer sausage sheds less water while smoking than its competitor. Depending on your preferences, you can also ferment them.

Salami and summer sausage are both cured meats. You must use the curing ingredients while processing your food.

The three curing elements are salt, sodium nitrate, and lactic acid. You can’t skip them as they play a vital role in removing germs and pathogens that may interfere with your food’s flavor.

After applying the curing ingredients, you need to stuff the meat into casings to form the right shape. Then, set them aside or hand them to let them dry.

It’s hard to tell the difference between these two types of meat due to their similar appearance.

They both have a pink ring surrounding a brownish core. Only after checking the texture closely can you find the salami, which is drier. 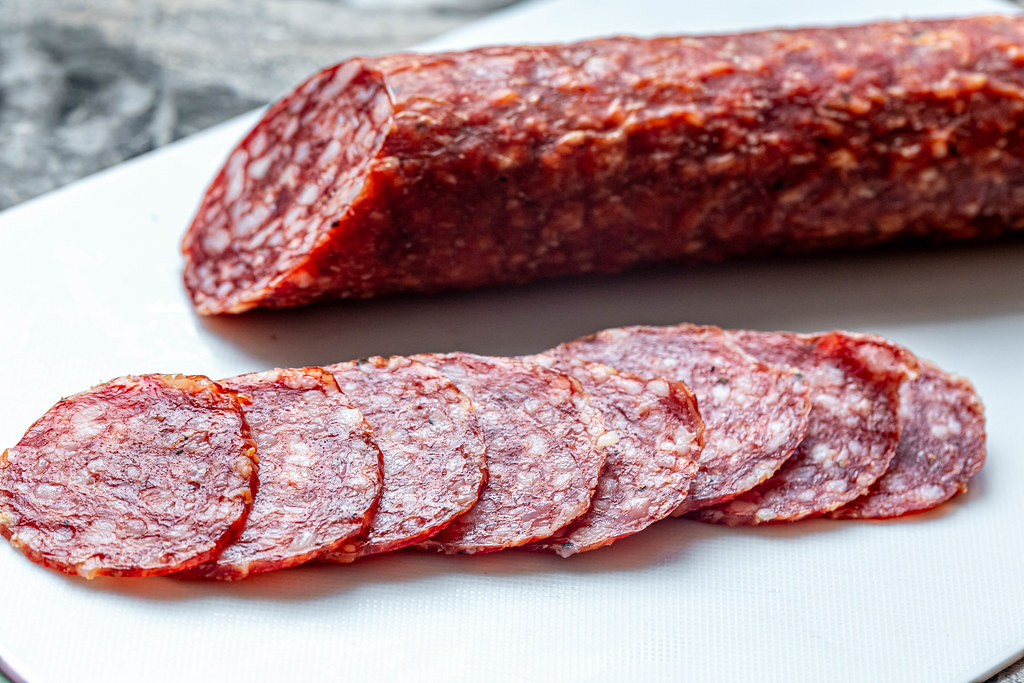 Salami and summer sausage has the same preparation with three primary steps:

The flavor differences between summer sausage and salami are often not very noticeable because the foods call for similar ingredients and cooking processes.

Both come with a tangy and peppery flavor from the preservation and flavoring. Salami may have a slight hint of salty flavor, yet most cured meat fans love it.

2. Why do they call it “summer sausage”?

Prior to the invention of refrigeration, summer sausage was a sort of cured meat made in Europe.

People at that time came with the curing process that helped their food stay good during the summertime. Hence, we have the name “summer sausage.”

You can learn more about the history of summer sausage from this video:

3. What are the similarities between salami and summer sausage?

Salami and summer sausage are similar in two terms:

To make the food, you have to ferment the meat and other ingredients, giving it a distinct, sour flavor.

Salami and summer sausage are different in their moisture, with the salami being drier. Apart from this factor, the two types of meat share many things, such as preparation and serving.

These foods can last long thanks to the curing process. To maximize their lifespan, you must leave them unopened and keep them in the right place.

Hopefully, you will find this article helpful. For any further information, please feel free to ask. Thank you for reading!